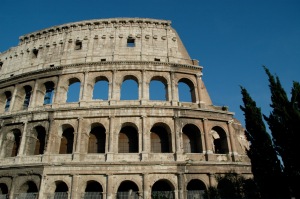 In the heart of Rome can be found the most exclusive shopping in the world.   Italian
designers Armani, Prada, Gucci, Ferragamo, Dolce & Gabbana and Cavalli have stores that line the streets at the base of the Spanish Steps.

You can imagine the uproar when on March 20, 1986, McDonalds opened its first restaurant in Italy located at the Piazza di Spagna. One designer in particular protested the American fast food chain. The Rome headquarters of Valentino backed up to the restaurant and reported that an unbearable smell of fried food was fouling the air. Valentino was one of many Romans that objected to the opening of the American fast food chain. Thus the Slow Food Movement, founded by Carlo Petrini was created with the initial aim to defend regional traditions, good food, gastronomic pleasure and a slow pace of life. The movement has since evolved to embrace a comprehensive approach to food that recognizes the strong connections between plate, planet, people, politics and culture. Today, Slow Food consists of 100,000 members around the world that are part of local chapters that bring the Slow Food philosophy to life through the events and activities they organize in their communities. 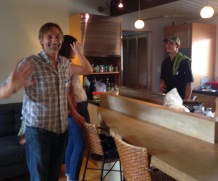 Recently, I had the pleasure of attending a dinner hosted by the chairman of the Slow Food Ventura County chapter, Chuck Barth. Chuck and his wife and daughter, opened their home to a gathering of passionate and hungry foodies bringing together food suppliers, farmers, publishers, chefs, cattle operators and educators to highlight the new Ventura chapter of the expanding Slow Food movement.

During a brief stint as a raw foodie, Chuck became deeply connected to his food sources and dedicated to Farmers Markets. When he added meat back in to his diet, he connected with Watkins Cattle Company. They were present at the local Farmers Market, but their sales volumes were too low to remain. That’s when arrangements were made to begin home sales from the Barth garage, complete with a new freezer provided by Watkins. Three years later the freezer is stocked weekly and two new accounts, Pedalers Fork and Apricot Lane Farms, now purchase their pasture-raised meats.

With sales growing it soon became evident that a business plan was needed. In July, Chuck reached out to Renee Rock of CLU for her assistance. It was during their dialog regarding regional foods that Renee recommended they start a local Slow Food chapter. Chuck explained that his previous experience with Slow Food had never left a meaningful impression. Its presence was absent from any worthwhile activities in the greater LA area. After reading the Slow Food’s chapter handbook realized it was the energy of the members that made for its success. 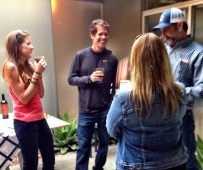 With a knack for connecting people and a passion to deliver awareness, Chuck’s excitement for his new venture was contagious. In less than a year, he successfully gathered a large group of foodies to support the motto of Slow Food International: access to good, clean and fair food for everyone. 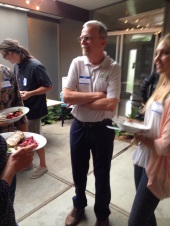 Chuck infused the spirit of the Slow Food movement into our gathering. Those at the table understood the significance of the evening and embraced the future of the Slow Food Ventura County Chapter.

Today, McDonalds has expanded to over 500 locations throughout Italy, with the original restaurant still operating at the base of the Spanish Steps. While Valentino’s efforts to remove fast food from Rome were unsuccessful, it spawned a movement that is changing the way we view food and the way it is grown, prepared and processed.

How can you get involved?

You can support Slow Food’s efforts by joining Slow Food USA and choosing the Ventura County Chapter for as little as $30 for an annual membership. http://www.slowfoodusa.org

“Eating is an agricultural act,’ as Wendell Berry famously said. It is also an ecological act, and a political act, too. Though much has been done to obscure this simple fact, how and what we eat determines to a great extent the use we make of the world – and what is to become of it. To eat with a fuller consciousness of all that is at stake might sound like a burden, but in practice few things in life can afford quite as much satisfaction. By comparison, the pleasures of eating industrially, which is to say eating in ignorance, are fleeting. Many people today seem perfectly content eating at the end of an industrial food chain, without a thought in the world; this book is probably not for them.”

One thought on “Valentino With a Side of Fries”